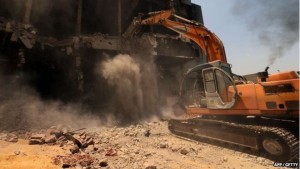 Egypt has begun demolishing the headquarters of the now-dissolved party of former President, Hosni Mubarak. The building in Cairo near Tahrir Square was torched in the 2011 uprising that toppled Mubarak. Demolition workers also began tearing down an office block that was once the centre of state bureaucracy. Egypt’s government approved the move in April and said that the land would be given to the neighbouring Egyptian Museum. BBC was there:

Mubarak’s National Democratic Party (NDP) was dissolved in April 2011 and its assets, including its headquarters on the River Nile, were seized by the state.  The BBC’s Middle East editor Alan Johnston says that those who rose up against Mubarak will certainly welcome the demolition work.

But he says that many will be deeply disappointed that in other, more important ways, their revolution failed to fulfil their expectations. Mubarak was sentenced to three years in jail on corruption charges after a retrial earlier this month.

His original conviction was overturned in January over legal procedures. The former president’s two sons were also given four years in prison in the same case which centres on the embezzlement of $14m (£9.2m) earmarked for renovation of presidential palaces.