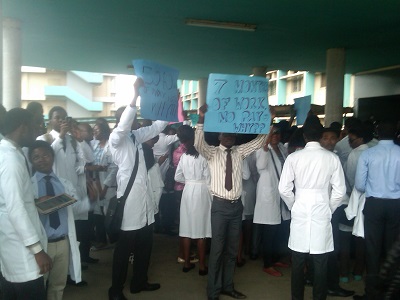 Doctors in Ekiti State under the aegis of Nigerian Medical Association (NMA) have declared an indefinite strike to protest what they described as “incessant kidnappings of medical personnel” in the state.

The NMA said in Ado-Ekiti at the weekend that its members had to declare the strike to protest the kidnap of a former Chief Medical Director (CMD) of Ekiti State University Teaching Hospital, Dr. Patrick Adegun, his wife and a nurse with the Federal Teaching Hospital, Ido Ekiti, Mrs. Margaret Aladenika.

This was contained in a strike letter signed by the Ekiti NMA chairman and secretary, Dr John Akinbote and Dr. A. A. Akinyele respectively and addressed to Governor Ayodele Fayose.

In the letter, the doctors lamented that kidnappings of health workers in the state had become rampant and demanded urgent intervention by the government and relevant security agencies.

In reaction, the Special Assistant to Governor Fayose on Information and Civic Orientation, Mr Lanre Ogunsuyi, decried the development even as he said government had taken steps to tackle the situation.

Ogunsuyi, therefore, pleaded with the doctors to shelve their resolve to go on strike as it would not be in the interest of the state, particularly for those with critical ailments.

He said: “Police and State Government will make Ekiti secured for health workers and every worker in the State. We will put in place good measures for people to be able to move without hindrance.

“We urged them to go back to work because suspending work in the hospital will aggravate the problem .But we are going to keep our strategy to ourselves for security reason. We will hold consultations with the doctors to know what their fears are and how to fashion out ways of providing security.

“To us as a government, every kidnap is criminal and condemnable. We are working with the commissioner of Police to tame criminalities in Ekiti State. The governor will hold consultations with all relevant stakeholders to tame all these problems one and for all”.