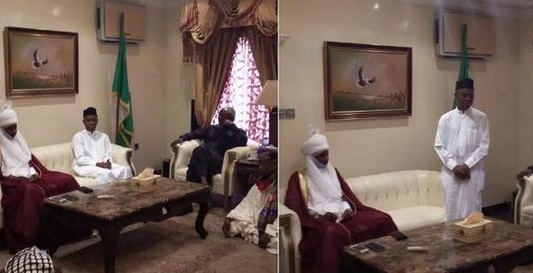 The Emir of Kano, Alhaji Muhammadu Sanusi II, on Saturday in Kaduna commended people of the state for choosing a competent leader in the person of a former Minister of the Federal Capital Territory, Malam Nasir el-Rufai.

Sanusi, who stated this when he led the Kano Emirate Council to congratulate el-Rufai on his victory at the April 11 election in the state, described the governor-elect as “competent and capable”.

The spokesperson for the Governor-elect, Mr. Samuel Aruwan, quoted the Emir in a statement to have commended the people of the state in their choice of el-Rufai, whom he said would take the state to the next level in terms of development.

Sanusi, who is a former Governor of the Central Bank of Nigeria, said the people of Kaduna had elected a competent and capable governor who would  provide sound leadership to the state.

The ex-CBN governor was also quoted to have called on the people of the state, irrespective of religion, ethnic and political affiliation, to pray and support el-Rufai for peace and even development in the state.

The statement read, “The Emir expressed his confidence that el-Rufai will provide strong leadership good governance and unite the diverse peoples and faith communities of Kaduna State.

“Sanusi further charged el-Rufai to focus on responsive and dedicated leadership and never to lose his connection with the people”.

The Emir, who recalled his decades of friendship with the governor-elect, said he is delighted “that Nigerians with such ability and experience are stepping forward to offer themselves for leadership” and “prayed that God would grant el-Rufai a successful tenure and bless the people of Kaduna State”.

In his response, Mr. el-Rufai thanked the Kano monarch for his visit and commended him for redefining the traditional institution.

He was quoted in the statement as saying “I am grateful and humbled by your visit and prayers, I promise the people of Kaduna that I will not disappoint them. I will govern with fear of Almighty God and will unite our diverse people towards attaining real development.

“Our doors are open to all segments of our society. We will be a listening government and conscious of common good and to the glory of Almighty God. I will not let our citizens down by the grace of God”.