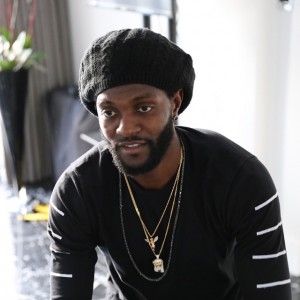 Adebayor has been going on and on about how his family members are after his life.

Well the soccer star, Emmanuel Adebayo, has been given a compassionate leave by his football club, Tottenham Hotspur for a second time this season.

Emmanuel Adebayor has been granted compassionate leave by Tottenham Hotspur for a second time this season to return to Togo to sort out his personal issues.

Spurs head coach Mauricio Pochettino has excused Adebayor from training this week and the final game of the season against Everton at Goodison Park on Sunday. He will not travel on the post-season tour to Malaysia and Sydney.

Adebayor has made a series of allegations against his family over Facebook in recent weeks that have prompted concerns over his mental state.

The latest of his messages accused brother Kola of holding a knife to his throat and included claims that he has often considered suicide as a result of his family problems.

Tottenham want to sell Adebayor during the summer, meaning he could have already played his last game for them, but the club’s immediate concern is the player’s well-being.

It is hoped that giving Adebayor time off to clear his head and return to his homeland will allow the 31-year-old to sort out his problems and grievances in time to return to pre-season training, either at Tottenham or with another club, in the correct frame of mind.

Rejecting claims that he had evicted his mother from his house in Africa, Adebayor claimed people were attempting to direct witchcraft, or Juju, at him.

Adebayor was then given compassionate leave by Spurs in December after a close family member was taken seriously ill.

Having taken a week off, Adebayor returned to Tottenham before Christmas but has made only five appearances since then, starting just one game.

Adebayor still has a year remaining on his Spurs contract and chairman Daniel Levy faces the prospect of having to take a financial hit on the former Arsenal man to offload him this summer.

There is virtually no prospect of any clubs agreeing to match Adebayor’s £100,000-a-week wages, which means Levy can expect to pay out at least £2.5 million to cover the shortfall on his remaining 12 months.

Aston Villa manager Tim Sherwood could turn to Adebayor if he has to find a replacement for Liverpool target Christian Benteke. The pair enjoyed a close and fruitful working relationship at Spurs.

Friends and confidants of Adebayor are worried about his recent actions and claim he is not listening to advice or efforts to help, although he has consulted with Chelsea striker Didier Drogba about his problems. There is growing concern that Adebayor’s Facebook messages will put off any interested clubs.