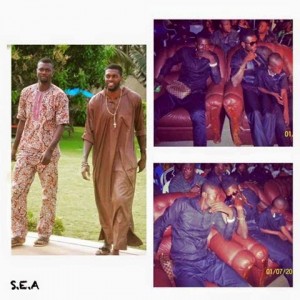 Just weeks ago, Togolese football star, Emmanuel Adebayor took to Facebook to expose his family for trying to ruin his life.

One of those people was his brother Rotimi Adebayor who he accused of stealing  his valuables and even phones from a football Academy in France.

In a new interview with Sun, Rotimi tells his side of the story: –

Are the allegations levelled against you untrue?

But you have apologized to him; did he accept your plea?

No response from him yet. I apologised be­cause he is my elder brother and we have re­solved so settle issues amicably. My elder sister advised us to bury the hatchet.

You met him at a training pitch yes­terday (Thursday, May 21)…

Yes, we met and he said, ‘Omo Iya ba wo ni’ (My brother how are you). However, I didn’t play with them because I wasn’t in the mood.

And you didn’t wait for him after the training.

No, I was there till he left but he didn’t greet me as he drove off.

He is a superstar indeed?

I agree, yes he is

And you annoyed him so much that he made such revelations about you?

Hmh! I can’t explain what happened

But you know what happened to the missing 21 phones including play sta­tion games from 27 players?

Is it because you cannot steal your own phone?

How did it happen and when?

It was at the FC Metz football Academy in France and I was 14 years old then. My mates were already at the training pitch on that day, so I was running to meet up with them when I found the mobile phone on the aisle within the training complex.

So you picked it and didn’t declare that you found a mobile phone, which belongs to your teammate.

That was the mistake I made and I regretted it thereafter. Actually I kept it on the table in my room and my roommate wanted to know who owns the phone because he didn’t have any then. I told him how I found it, and then he de­manded to make use of it.

Kelvin. He is an American and the owner of the phone is from Asia but from an ‘Arab coun­try’ The ‘Arab’ boy saw the phone with Kelvin and immediately reported the case to the man­agement of the academy.
They informed my brother about it. He called me to hear my side of the story but I was later informed to pack my things out of the academy.

Your brother has released three posts on Facebook to paint a bad pic­ture of the family?

It’s really disheartening that such a thing is happening to us right now. My wife was mocked at the market after the first post Seyi (Emmanuel Adebayor) published on Facebook. She called me to inform me about what people are saying. Immediately I logged in and read the post. I felt very sad.

What did you do thereafter?

I called him and asked him why he had to do that but he got angry with me. We had a heated argument on phone, which led to unprintable words being used freely. As a matter of fact, we quarrelled over the phone for almost two hours.

You hurled insults on your elder brother who made you and the Ade­bayor family famous?

Yes I did that because I felt very sad and em­barrassed. Then he made a decision to inflict more insinuations against me.

He did in exactly thirty minutes and before I could log into my F acebook account, my friends called me to quickly go and read the second part of my ‘film’.

The post he released, the second rant against the family. It’s sad because our mother, who poured her blood on our heads, received the greatest insult of her life. A woman who suf­fered so that we can live a good life is now re­ceiving such a disgraceful accusation.

You mean the witchcraft allegation?

Yes and all those nonsense things he wrote against me and our elder sister in Ghana. Well, we have decided to leave it all in God’s hand. Our mother is a not a witch neither does she practice witchcraft. How can your mother wish you bad luck? I play football as well and I know that players do suffer loss of form. He shouldn’t put the blame on anyone.

He said that he sent a huge amount of money to save Peter’s life but al­leged that the family squandered the money?

To be honest, he did. Seyi sent the money but it was judiciously spent to meet his (Peter’s) health needs. He suffered before he died.

Some people in Togo are of the opinion that Peter died as result of the hard substances he used to inhale?

No, he wasn’t into such but he was hooked on ‘Igbo’ (Indian hemp), which affected him mentally. He was such great person who also helped financially to make Seyi achieve his football dream.

And the family didn’t spend the mon­ey very well for his rehabilitation?

No, we did but he died. We lost him in 2013. His death and our father’s in 2005 are factors that have affected the family in a big way but I wouldn’t like to be drawn into such issues now.

What happened to Seyi’s home in Ghana?

He has over 50 houses in Lome and cur­rently lives in Didjole. He also has some others in Ghana. He has taken custody of everything.

What about the house he alleged your elder sister rented out?

Opinions are divided among the citi­zens of Togo concerning Emmanuel Adebayor’s biological mother?

People can say whatever they like. He is my elder brother and we know we have the same mother. I am less bothered about the rumour go­ing round the city.

You blamed yourself for the lingering crisis in the family. What did you do?

A lot of people do not understand the begin­ning of this issue but I put the blame on myself because of the boy I wanted to help. His name is Masaudu. He’s from the Republic of Benin. I brought him from the rough side of the bor­der so that he can help us with some domestic work. He grew up with the family and betrayed us. Masaudu cooked up stories for Seyi to be­lieve and he succeeded in destroying our fam­ily. He was the one that was sent to inform our mother to pack out of the house. But I believe that God’s judgment will prevail. I will continue to appeal to him (Emmanuel Adebayor) to be considerate in his judgment. I want him to for­give and forget in the memory of our late father and forget what people are telling him. We have our children and we shouldn’t let this issue de­generate into generational fight.