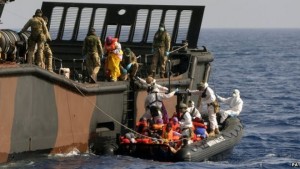 “We need to count on your support to save lives,” she told a Security Council briefing on EU plans to use force against smugglers.

Libya, where many smugglers operate, has objected to the EU proposals. More than 1,800 people are feared to have died this way in 2015 – a 20-fold increase on the same period in 2014. Some 60,000 people have already tried to cross the Mediterranean this year, the UN estimates.

Many of the migrants are fleeing conflict or poverty in countries such as Syria, Eritrea, Nigeria and Somalia. Speaking in New York on Monday, Ms Mogherini said the EU’s first priority was to “save lives and prevent further loss of lives at sea”. She outlined proposals agreed by EU governments last month.