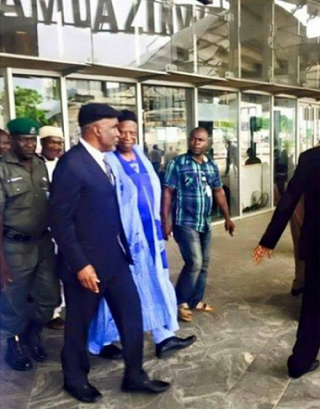 Nyako, who arrived from London on a Lufthansa Airline flight, landed at the Nnamdi Azikwe International Airport, Abuja, Saturday.

It would be recalled that Nyako fled Nigeria since July 2014 following his impeachment by the State House of Assembly.

He was subsequently declared wanted by the Economic and Financial Crimes Commission, EFCC, for financial impropriety.

It remains to be seen if the anti-graft commission would pick him up now that his party, the All Progressives Congress, APC, is in power.

It was believed that Nyako’s impeachment along with his travails with the EFCC was masterminded by the Presidency following his sharp disagreement with former President Goodluck Jonathan.

Baba Mai-Mangoro (as the former governor is called by his loyalists), who was one of the G-5 PDP Governors that defected to APC, had accused the then President of allowing the Boko Haram insurgency in the Northeast to fester.

Confirming his return to the country on Saturday in a telephone interview with SUNDAY PUNCH, Nyako said that “I’m back. Yes, I’m back in the country”.

He said the task of moving the country forward must not be left in the hands of President Muhammadu Buhari alone.

“We must all join hands with him to repair the country”, he added.