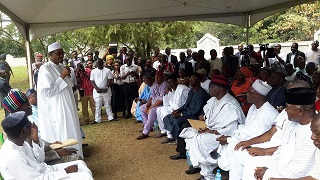 Governor-elect of Benue State, Samuel Ortom, has expressed his administration’s desire to partner with the in-coming Muhammadu Buhari-led federal government to end the incessant clashes between farmers and herders in the state.

Ortom made this known after a high-powered delegation led by Senate Minority Leader and APC leader in Benue State, George Akume, paid a courtesy visit on the president-elect at Defence House in Abuja on Wednesday.

He explained that the incessant clashes had made life difficult for the people of Benue State, who are predominantly farmers.

According to Ortom, tackling the menace would go a long way in reviving agriculture to create jobs, which would in turn boost the local economy as well as contribute meaningfully to national development.

He said, “Mr President-elect, Vice President-elect, distinguished Nigerians, let me draw our attention to a very familiar threat to lives and property in this country. And that is insecurity.

“As we all know, no country or state can develop without security. When we live in peace, we can then put in place strategic plans to boost our economic development.

“We are all too familiar with the incessant clashes between pastoralists and farmers in many parts of the country. From Benue to Plateau, Taraba to Zamfara, Katsina and name it.

“Several communities have been sacked by these people, whose business it has been to spill innocent blood. For us in Benue State, our people, who are mostly farmers, cannot even afford to go to their farms any longer for fear of these people.

“Our new government in Benue will be happy to partner with the Federal Government to bring this menace to an end as soon as possible”.

The governor-elect drew similarities between Buhari’s tenacity, which he said saw him through the struggle to provide leadership for the nation, and the fighting spirit of the Benue person.

He also appealed to Buhari, whom he noted had a long history of affinity with Benue since his days as a Brigade Commander in Makurdi, to take a second look at certain decisions, which had deprived the state of federal institutions.

Ortom equally reminded President-elect Buhari about the sorry state of the power sector, which he noted, had crippled the growth of small and medium scale enterprises.