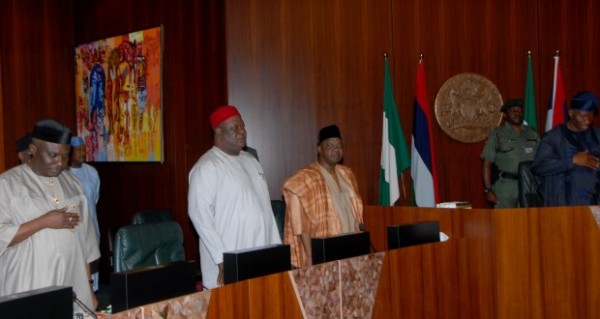 We had reported yesterday citing investigations by Daily Trust that the Federal Executive Council (FEC) meeting today will be a valedictory session and the last under Jonathan.

The newspaper also said the information minister confirmed the development in April 29 during a press briefing with State House Correspondents.

The minister, in a statement, however, denied the report.

The statement by the Press Secretary to the Minister, Mr. Joseph Mutah, denied ever telling journalists that the president was going to dissolve the council today.

“The minister said at no time did she speak to journalists on the dissolution of the Federal Executive Council by President Jonathan.

“Senator Akwashiki is surprised that the news report, which initially quoted an unnamed minister from the Southwest, ended up attributing the comments to her.

“The Information Minister therefore urges the general public to disregard the tendentious report as false and malicious, which only exists in the warped imagination of its authors”, the statement said.