Home Politics Forcing Mu’azu, Others To Throw In The Towel Will Reduce PDP To...
Facebook
Twitter
WhatsApp 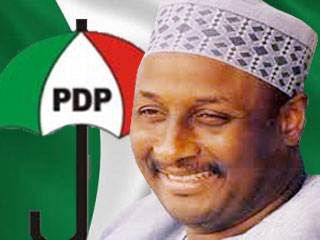 A former national organising secretary of the Peoples Democratic Party (PDP), Alhaji Umaru Dahiru, has warned that forcing the national leadership of the party to throw in the towel will not augur well for its reconstruction.

The Baraden Bauchi (traditional title) specifically said any attempt to force the National Chairman, Adamu Mu’azu, and members of the party’s National Working Committee to resign their positions would reduce the PDP to a regional party.

According to Dahiru, the NWC of the party must not be blamed for the PDP’s poor outing in the last general elections, saying that there was no basis for comparison between the United Kingdom election and the Nigerian elections.

“In the UK, the political party conducted its campaigns but in Nigeria the campaigns were carried out by support groups and a high-powered team whose members were selected by the top.

“Apart from sidelining the party in the campaign, there are other issues that are responsible for the defeat of PDP at the just concluded general elections. The remote causes of PDP’s defeat include glaring impunity, high level corruption, uncontrolled insecurity, injunction and godfathers”, he said.

The PDP chieftain believed that the immediate cause of the defeat of the party in the presidential election and the subsequent defeat in most northern states was due to hate campaigns against the North, especially the one by Ekiti State Governor, Ayodele Fayose, adding that the unguarded utterance by the outgoing First Lady, Dame Patience Jonathan, whom he called ‘Big Madam’, also impacted negatively on the party in the North

When the unguarded utterances continued unabated, according to him, over 90 per cent of the supporters of the PDP had a rethink about voting for the party or its candidates.

He recalled that the initial intention of those who formed G18 group, which later metamorphosed to G34, was to create a large party of national spread devoid of sectional, tribal or religious sentiments.