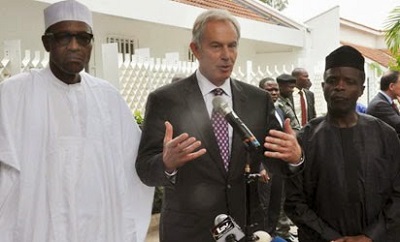 The Conference of Nigeria Political Parties has rejected some suggestions made by a former British Prime Minister, Tony Blair, on how the incoming All Progressives Congress federal government should fix Nigeria.

The former PM, who was the guest speaker at the APC two-day Policy Dialogue on the Implementation of the Agenda for Change in Abuja on Wednesday, had called on President-elect Muhammadu Buhari, to “take advantage of that goodwill that comes with being elected to take difficult decisions that may inflict immediate pain, but in the long-term interest the country and government”.

Mr. Blair, who was represented by Lord Mendelson, one of the leaders of Labour Party in the United Kingdom, specifically cited Indonesia as an example where President Joko Widodo removed oil subsidy.

“One of the first things he did when he was inaugurated in October was to smash Indonesia’s hugely expensive and inefficient, yet popular fuel subsidy”, he said.

The remark has been interpreted to be a subtle way of telling Mr. Buhari to do the same.

Reacting to the comment, spokesperson for the CNPP, Mr. Osita Okechukwu on Thursday, said Mr. Blair’s solution would not work in Nigeria since oil subsidy in the country, to a very large extent, differs from the ones in Indonesia and other countries.

He alleged that those who propounded the nebulous economic policy that government has no business in business, which simulated pervasive corruption, created huge inequality gap and pauperized Nigerians, were at it again.

“In our own case the issue is pure and simple, unbridled corruption. Our position is that there is little or no subsidy. Nigerians have suffered enough and do not need more impoverishment”, the group said.

“Secondly, we have implicit confidence that General Muhammadu Buhari will wage a strident war against corruption in the oil and other sectors. Our vote for him was predicated on his uncommon integrity and antecedent of an anti-graft warlord”.

The CNPP said it would interest the former British PM and those championing the removal of oil subsidy in Nigeria to know that from 2010 to 2013 alone, the amount spent as subsidy rose astronomically from N680 million to N2.6 trillion.

“Can this pass any prudent and genuine forensic financial scrutiny? Or can GMB support such travesty? It asked.

“Our worry in the CNPP is that a lot of economic theories are being woven around with utter disregard to GMB’s innate economic policy stand-point, which is transparently pro-people; hence his celestial bond with the Nigerian masses”.

“Are they telling us that the new refineries GMB pledged in his campaign will not come on stream or is impossible? This is a man that built the Warri and Kaduna refineries as Minister of Petroleum and we have implicit confidence that he will fulfil his pledge”.

The CNPP also reminded Mr. Blair that the president-elect is by far different from the outgoing President Goodluck Jonathan, who could not fulfil his promise of building three Greenfield refineries whose contracts were awarded to a Chinese firm at $23 billion but which later abandoned them.

The CNPP, however, pleaded with Mr. Blair to assist the incoming Buhari administration to source for genuine Foreign Direct Investment for critical infrastructure in Nigeria.

“For as late icon, Professor Chinua Achebe wrote in his seminal treatise – Trouble with Nigeria – the character of one man could establish that quantum change in a people’s social behaviour that social miracles can happen”, it said.

“Finally, Mr Blair should not forget that it is not immediate pain but Foreign Direct Investment from Charles Yerkes, JP Morgan and co, which revolutionized the London Underground railway system, in the last century”.