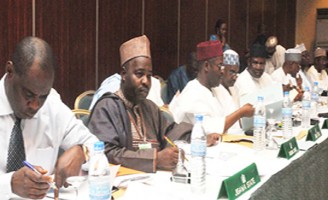 The Forum of Finance Commissioners in the country at the weekend faulted state governors who are owing workers’ salaries, saying that no governor had any excuse for not paying workers, even as the three tiers of government shared N388 billion for May expenditure.

Chairman of the Forum and Commissioner for Finance in Ebonyi State, Mr. Timothy Odaah, who spoke at the end of the Federation Accounts Allocation Committee, FAAC, meeting in Abuja, told journalists that governors owing should be held responsible by the workers and the public adding that such governors should have made payment of salaries their priority, rather than spending state funds on electioneering campaigns.

At the last count, no less than 12 states are reportedly owing workers’ salaries or unable to implement the existing national minimum wage.

Some of the states owing workers’ salaries include Bauchi, Plateau, Ondo, Kogi and Benue.

Kogi case is worse as there are allegations the workers’ salaries would be slashed by 40 percent while civil servants are currently on strike in Bauchi over alleged inability of the state government to pay arrears of workers’ salaries.

The case is not any better in Enugu State where retired primary school teachers’ gratuity and pensions in the last 13 years have not been paid just as workers in the government-owned Daily Star newspapers, water corporation and the state-owned transport company, ENTRACO, were being owed several years of unpaid wages.

In reaction, Odaa said, “Why should states be owing workers’ salaries when they have been regularly collecting their statutory allocations from the Federation Account? We hear of some states owing 11 months, nine months, seven and so on. What have they been doing with their allocations? And workers have been looking at them!

“Payment of salaries is not an achievement. It is not a thing that a governor would pay when he likes. The salaries are built into the allocations that the states collect every month and so the governors are supposed to pay regularly as a priority. So why should they not pay? Governors must pay salaries. Salaries must be a priority.

“Look at Ebonyi State, as poor as it is, we are not owing workers. Even the workers agitated for an upward review last month and our governor even approved it, paying according to the federal structure. So why should any state owe and where has the money the states have been collecting gone to?

“The press should take this up and give them the heat. They were able to fund their elections and then workers are being owed up to this moment”.