Two gay men who met online and started a physical relationship discovered they were actually brothers live on the Jeremy Kyle show. 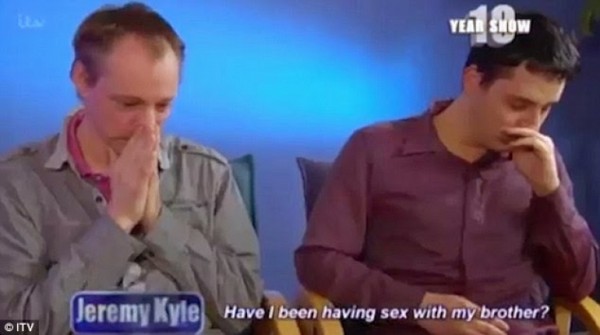 A DNA test revealed the shock truth for lovers Paul and Lee, who had been a couple for years after coming across each other online.

The pair – who exchanged flirty messages for a full two years before hooking-up – were none the wiser to the fact they shared the same mother…and were in fact closer than either of them could ever have imagined.

The reality only came to light when Lee’s family and friends first met his new lover and noticed a striking similarity between Paul and his mother’s former husband, Ron.The pair sitting in a stunned silence for 20 seconds, with even notorious motor-mouth Kyle left lost for words at the shock revelation.The couple-come-brothers had never met before chatting online.

Paul was taken into care when he was only 18 months old, with Lee later conceived by the same mother, Ena.