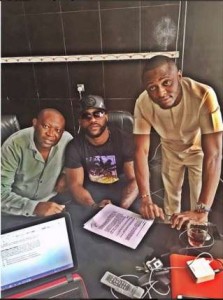 Nigerian pop star Iyanya is excited to have extended his endorsement contract with telecommunication giant MTN by another year.

Iyanya revealed this today, Tuesday May 12, 2015 on his Instagram page after wrapping up the contract extension.

The deal was brokered by the Paul Okoye led Upfront Bookings, which handles majority of the endorsement deals between celebrities and top Nigerian brands.

Iyanya has been associated to MTN since he won the maiden edition of Project Fame in 2008.

The Triple MG act took time out to thank MTN for the contract extension. “Thank You to @mtnng For another year to represent the brand. It’s been a smooth and great relationship since 2008 When you brought my career to light through MTN Project Fame, 8 years later we keep growing together, now this is a relationship that works” wrote Iyanya on Instagram.

“Also to @upfrontbookings @pauloo2104 @fusengn for managing us to make sure we are in line with @mtnng and to @ubifranklintriplemg for always putting the fire on me to Stay focused and keep winning” he further added.

Iyanya did not leave his fans that have supported him throughout his career. “To all My Fans for always keeping me relevant and enjoying everything I put out for you. And to the media you have been great. God bless you all. AMEN” he wrote.

Iyanya’s relationship with Nigerian brands has also been largely successful; apart from MTN, he is also an ambassador for Zinox, and SOLO phones.