Home News Feed He Revived Me With Water After Raping Me 6 Times-14-yr Old Rape...
Facebook
Twitter
WhatsApp
A Fourteen-year-old girl has recounted her four-year ordeal in the hands of a neighbour, Felix Emmanuel, an Edo State indigene, who took advantage of her innocence. 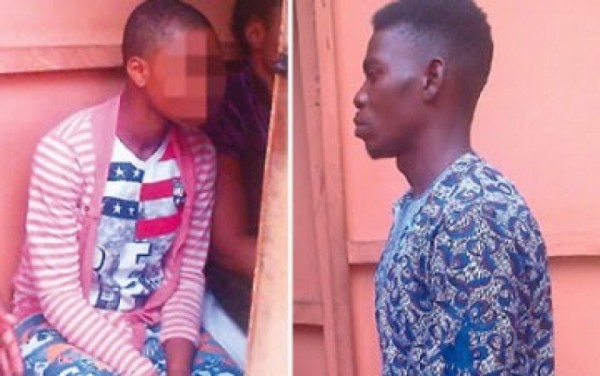 At 14, she explained that if she knew that the threats that had kept her quiet from disclosing what she was going through were mere lies, she would have told her mother about what was happening to her before it went on for too long.

“He (Emmanuel) first raped me in 2011 when I was 10 years old. He brought out a calabash with cowries in it and told me that if I told anybody, I would die within 24 hours,” she told our correspondent, sobbing.

“The first time he raped me, my mother sent me on errand. I was passing by his room on my way back when he called me.
“I did not know what he wanted from me, but I answered him. But as soon as I stepped in the door, he covered my mouth and dragged me to an unoccupied room in the building.I noticed that there was another person inside the room – Jerome – who I knew as a friend to Emmanuel.

“Jerome pinned me down and covered my mouth and Emmanuel raped me in the room. When he was done, he gave me a handkerchief to clean up the blood that was coming out from my body.
“He demanded for the handkerchief but I did not give it back to him because I did not know what he wanted it for. When I was about to leave the room, that was when he brought out the calabash, threatened and warned me not to ever tell anybody what happened.”

Over the next two years, Jane had changed a lot and she became erratic in the house.Margaret her mother said,

“When I noticed the way she changed, I asked if anybody was molesting her, but she said no. I thought maybe she needed a change of environment, so, I sent her to live with my sister in Ghana in November 2013.
“But when she got to Ghana, she started to misbehave again. My sister was curious and one day asked if she was still a virgin. She (Jane) refused to answer. But she later took her for a test and confirmed that she had been sexually active.
“When my sister asked her who defiled her, she told her it was our neighbour but I could not confront him even though I saw him everyday. I simply did not know what to do because I thought if I made it a police issue, I might not be able to afford the cost that may come with that.”

Jane was later returned to Nigeria in October 2014 but as soon as she got back, she caught the eyes of Emmanuel and her cohorts again.Jane said,

“When I got back to Nigeria, I decided to stay clear of Emmanuel, I was afraid and tried to avoid him. But one day, I was sent on errand and he told me to help drop some tubers of yam for his mother along the way, while I waited outside to collect the yam, he dragged me into his room.
“That day, Emmanuel and three friends of his – Ayo, Felix, Mugambo – took turns to rape me. Some days after that, he also took me to his room, he raped me six times. When I fainted, he splashed water on me to revive me. Sometimes, he used condom, sometimes, he did not. I just want him to go to jail for what he did to me.”

Jane said Emmanuel always referred to the calabash in his room anytime she protested.
Jane’s mother who said she did not understand that there may be a connection with the sexual abuse her daughter had suffered and her erratic behaviour, always beat the girl until the Esther Child Rights Foundation was notified.
Executive Director of the foundation, Esther Ogwu, said she was notified about the abuse of the child but only learnt of the series of sexual abuses the girl had been subjected to over the years when she interviewed her.Ogwu said

, “The girl has suffered so much. But the mother did not see this, she only saw a girl that was misbehaving. It is absolutely wrong to beat a child that has suffered sexual abuses because that is not the solution.
“The first step we took was to take the girl to the hospital for test. The doctors confirmed that the girl had been sexually assaulted on multiple cases. The scary part was that she had contracted so much infections that we had to ensure that was treated urgently.
“We later got the police involved and we are happy that action was taken on the issue.”Any mother who is close to her daughter and is observant should be able to tell if she is being abused over such a long period of time. Many parents are simply not doing enough to secure their female children against sexual predators,”

Emmanuel was arrested and transferred to the Department of Criminal Investigation, Yaba Lagos.
He has since been arraigned at the Family Court 6, Ikeja, Lagos on charges of defilement and sexual abuse. He was granted N200,000 bail.