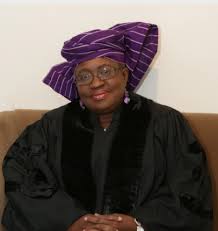 The immediate past Governor of Anambra State, Mr. Peter Obi has commended the Coordinating Minister for the Economy and Minister of Finance, Dr. Ngozi Okonjo-Iweala on her conferment with the Honorary Doctorate Degree, Doctor of Humane Letters, by the prestigious Yale University in the USA.

The Securities and Exchange Commission, SEC, Chairman, who described Dr. Iweala as a consummate economist, said that judging by her antecedents, no honour done her would be surprising.

“She is one of our best who can rival the best in any clime. Her humility and sense of work are amazing. Her patriotism and belief in Nigeria are inspiring”, Obi said.

The former governor added that Nigerians should remain grateful to people like Dr. Ngozi Okonjo-Iweala for working hard to shield the Nigerian economy as much as possible from the global economic crisis that hit even major economies.

Okonjo-Iweala, who was bestowed the honorary doctorate degree on Tuesday, is the second Nigerian to be so honoured after Nobel Laureate, Prof. Wole Soyinka in 1980.