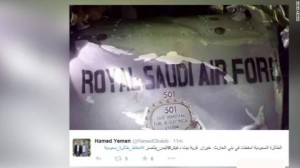 Rebels are claiming to have shot down a Saudi Arabian fighter jet on the outskirts of Sanaa, Yemen, a Houthi military official said, but the Yemeni Embassy in Washington denied the claim as the Saudis remained silent.

The Houthi official said the downed jet was an F-16, and several images published online — including on the Yemen Post’s Twitter and Facebook feeds — showed a purported image of the jet ablaze along with a photo of a piece of metal with the words, “Royal Saudi Air Force.”

Houthi rebels seized two unexploded missiles from the site, and the pilot remains missing, the Yemen Post tweeted. One of the photos that the paper posted appeared to show an intact missile. The news service later reported, citing the Yemen Defense Ministry, that the plane was an F-15, not an F-16.

CNN could find no record of the Saudi military possessing F-16s, but it does have many F-15s. In response to an inquiry from CNN, a Saudi official said the government would not comment on the claim. CNN cannot confirm the authenticity of the still images and video footage shared online.

Mohammed Albasha, spokesman for the Yemeni Embassy in Washington, tweeted at first that the report couldn’t be confirmed before tweeting 10 hours later on Sunday that “reports of a downed F16/F15 in Yemen are false.”