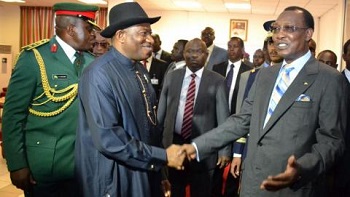 President Idris Deby of Chad, who earlier this year was quoted as saying his country’s military was closing in on elusive Boko Haram leader, Abubakar Shekau and urged him to surrender, has retracted the statement while also insisting he won’t divulge the location of the wanted terrorist even if he knew his location.

“I cannot tell you today that I know where Shekau is hiding and even if I knew I won’t tell you”, Mr. Deby told journalists on Monday at the Presidential Villa, Abuja.

The Chadian leader made this known while speaking with State House correspondents after a meeting with President Goodluck Jonathan.

According to Deby, the war against Boko Haram had not yet been totally won because Chad and Nigeria were not working together on the field.

He said it was regrettable that the “two armies that is the Nigerian army and the Chadian Army are working separately in the field”.

Speaking further on the purpose of his visit to Nigeria, the Chadian President said it was important for him to come to discuss with his Nigerian President counterpart as he leaves office to review “what we did together, what we achieved together in the fight against Boko Haram”.

He further stated that it is true that Boko Haram has not been completely eradicated.

“But they have been tremendously weakened”, he said. “I did not want to wait and come during the inauguration of the new government. I thought I should come to consult with Mr. President, to congratulate him and to have this exchange and have overview of what we have been able to achieve in the fight against Boko Haram”.

Chad, one of Nigeria’s closest neighbours has been involved in the fight against Boko Haram as it is also being affected by the activities of the insurgents.

Responding to questions on the multinational joint task force fighting in Lake Chad, he explained, “In the Lake Chad Basin, there are four countries Cameroon, Nigeria, Chad and Niger that are currently securing the area. The four countries have managed to form a multinational mixed force that will metamorphose to what is probably known as a Rapid Response Force that the African Union is trying to form for Africa”.

On the 2015 general elections, Mr. Deby congratulated Mr. Jonathan for the show of statesmanship demonstrated during the elections when he conceded defeat.

“We all know that elections in Africa is always contested but Mr. President demonstrated a lot of statesmanship, that he is a real democrat by conceding and congratulating the President-elect”, he said.

“So I came to congratulate him for leaving a legacy not only for Nigeria but for Africa as a whole”.