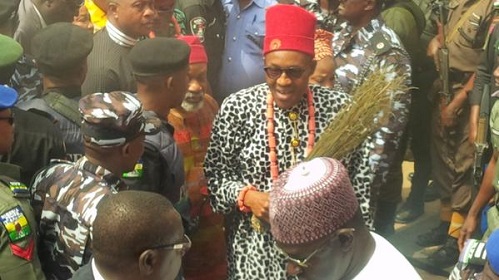 The Chairman of Presidents of Ohanaeze Ndigbo in seven Igbo speaking states, Dr. Chris Eluemunoh, on Tuesday warned against any attempt to “further marginalise” the ethnic group in Nigeria.

Eluemunoh, who made this known in a chat with journalists in Awka, the Anambra State capital, said such attempt would be met by a strong move for self-determination by the Igbo.

According to Eluemunoh, Ndigbo had long concluded on such option and only waiting for the “opportune time” to use the joker.

He said already, the United Nations had invited some Igbo elders to hear them out on their demand for a sovereign state for the Igbo in June.

The delegation of Igbo elders would be led to the U.N by a former National President of Ohanaeze Ndigbo, Dr. Dozie Ikedife, he said.

He added that some time last year, the African Union had also granted an Igbo delegation a similar audience in Addis Ababa, Ethiopia.

Eluomunoh was speaking against the backdrop of speculation that the incoming Muhammadu Buhari administration might relegate the Igbo to the background because the people of the South-East voted against him in the just concluded general elections.

The Ohanaeze chief said the best path the Buhari administration would toe would be to discuss with Igbo leaders on how to chart a viable course for the country.

He admitted that the change that came to the country after the last general elections was a welcome development in light of the fact that the Peolpes Democratic Party had steered the ship of leadership of the country for the past 16 years.

He, however, argued that there would be no real change in Nigeria if there “is no structural change” in the country.

Eluemuno also disowned the Chief Ralph Obioha-led Ohanaeze Caretaker Committee, which visited Buhari recently and canvassed for appointments for the Igbos, dismissing report of any conflict in the organisation.