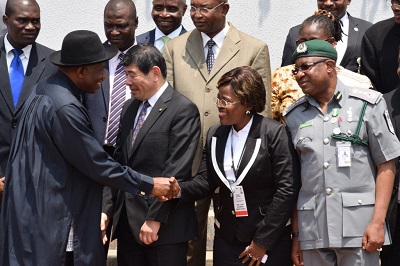 President Goodluck Jonathan Thursday in Abuja pledged to do all within his powers to ensure that all Nigerian territory still under the control of terrorists and insurgents are totally liberated before he hands over on May 29, 2015.

Receiving a delegation of Heads of Customs from the West and Central African Region of the World Customs Organisation, President Jonathan said that he was determined to hand over a country completely free of terrorist strongholds to the President-elect, General Muhammadu Buhari.

The delegation was led by the Secretary-General of the organisation, Mr. Kunio Mikuriya.

According to a statement issued by Special Adviser to the President on Media and Publicity, Reuben Abati, Mr. Jonathan disclosed that ongoing military operations in the North-East had already recorded huge successes, with two states completely free from the control of terrorists, while operations in the third state had reached a concluding stage.

“We can now say two states are completely free from terrorist control, while in the third state, it is only in one Local Government Area that they are still present; that is in the Sambisa Forest”, he said.

President Jonathan noted that the military had already moved into the forest to seize the remaining camps of the terrorists, adding that the recent rescue of about 300 abducted girls and women was further testament of the success being achieved in the ongoing counter-insurgency operation.

On his decision to concede victory to the President-elect before all the results of the presidential elections were collated and announced, President Jonathan said that elections must be approached from a nationalistic point of view.

“Our elections should be about where Nigeria is going. If Nigeria is moving forward, it is for the good of all Nigerians. My children and grandchildren will live and grow in this country and contribute to it. I always tell my colleagues to leave office when their time is up. We are trying to encourage African leaders not to remain in power as kings until death”, he said.

Speaking earlier, Mr. Mikuriya commended the outgoing Nigerian president for supporting the reform of the Nigeria Customs Service, noting that other African countries had already started emulating the vision, strategy, adoption to new technology and result- oriented training of officers that were captured in Nigeria’s reforms.