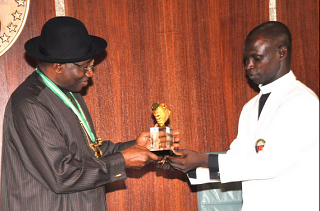 President Goodluck Jonathan on Friday revealed that his major preoccupation after leaving office on May 29 will be to engage religious and ethnic leaders across the country on the need to allow peace to reign.

He said he took the decision because of his strong belief that Nigerians can only practise their different religions in an atmosphere of peace.

He made this known shortly after he was presented with the 2015 Epitome of Peace Award by the Field Superintendent of The Apostolic Church Nigeria, Federal Capital Territory Field, Apostle John Buzu, at the Presidential Villa, Abuja.

Jonathan said the award, which was in recognition of the step he took after the March 28 Presidential election, which had led to peace in the country, had further motivated him into doing more for the country.

Jonathan said, “To whom much is given, much is expected. For you to honour me today, you have given me another mandate to work harder to ensure that we as Nigerians continue to live in peace.

“One thing I have decided I will do after leaving office is to be talking to faithful of all religions: Christians, Muslims and other religions, on the need for Nigerians to live in peace.

“We need peace in this country, no matter our religious persuasion or belief. That will be one of my main commitments when I leave office: to reduce discrimination in this country based on religious divides or ethnicity. I believe I will have so many apostles that will follow me to do that”.

While thanking the church for considering him fit for the award, President Jonathan noted that a number of Nigerians make extraordinary contributions to national development daily, but they go unnoticed.

He added that a few of them, including himself, are a bit luckier because their contributions are noticed.

“I sincerely thank you for considering me fit for this honour that you have just bestowed on me.

“All of us do a number of things every day. People have saved this country, we don’t even know some of them or what they did but some people are a bit luckier that their actions are noticed and sometimes rewarded.

“You have also noticed me with my little contribution, not just because I am the President of the country, but because of an action I took that you believe saved lives and you are honouring me”, he added.

Jonathan, who was presented with a white shirt and suit, which the church said connotes peace, a medal as well as a plaque, said the items would be displayed conspicuously in a Presidential museum or library, which he would put in place after leaving office.

“I am grateful for the insignia given to me: the plaque, the medal and the dress are quite unique. They will be very conspicuous in my Presidential museum or library so that even after 50 years, people will still see and appreciate what you have done today even if I have left this world and have gone beyond, what you have done will still be displayed in my library for people to see”, he said.

Shortly before presenting the award, Buzu said it was in recognition of the outgoing president’s outstanding leadership qualities, strides, contributions and laudable achievements as leader of the country.

He said Jonathan had also proven to be an excellent leader and a wonderful asset to the country, adding that one excellent quality that distinguished him for the award was the legacy of peace, which he had bequeathed to Nigeria and Nigerians.

The clergyman added that for conceding defeat and calling Gen. Muhammadu Buhari (retd.) to congratulate him after the presidential elections, Mr. Jonathan saved lives of those who would have been consumed by the ensuing violence had he done otherwise.

He said the President’s decision was unprecedented in the country and in Africa.