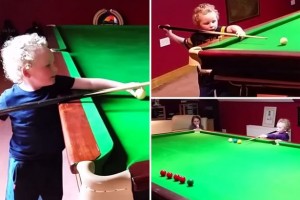 The family of an Irish 3-year-old whose snooker skills made him a viral star said the pool-table prodigy can’t tie his own shoes, but he isn’t shy about branding himself a “champion.” UPI reports:

Bernard Westman said he created the YouTube video compilation of 3-year-old nephew Adam Wynne’s best shots at the toddler’s request so the boy could see his own skills in action. “Like any child, he loves looking at himself, and kept asking when he was going to be put on YouTube. We decided to put together some of his best shots and he loves it,” Westman told the Irish Independent.

Wynne’s parents, Sean and Elaine, have a 6-foot-by-3-foot table at their home in Boora, near Tullamore, and the boy has been training with the snooker stick since he was large enough to hold one, the family said. Westman said the family was surprised by the viral success of Wynne’s highlight video.

“I have friends in Australia who were texting and ringing last night after the clip featured on the ‘Perth 9 News,” Westman said. “The response has been incredible. You have to remember that Adam has only just begun pre-school and can’t even tie his own shoelaces, yet he is able to handle a cue and pot incredibly well.” Westman said Wynne doesn’t seem to know about his Internet fame.

“He just wants to keep watching the shots. He has to ask his mother Elaine how to spell his name so he can find it on YouTube,” Westman said. “He is telling anyone that will listen, ‘I am the champion.'”