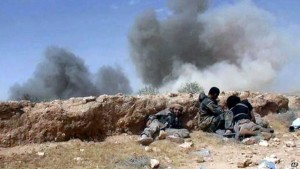 Islamic State militants have seized the last Syrian government-controlled border crossing between Syria and Iraq, a Syrian monitoring group says. Government forces withdrew from al-Tanf – known as al-Waleed in Iraq – crossing as IS advanced, the Syrian Observatory for Human Rights (SOHR) said. BBC was there:

The loss of al-Tanf to IS follows the group’s takeover of the ancient Syrian city of Palmyra on Thursday. The US says that fighting the militants will be a “difficult challenge”. Islamic State now controls “more than 95,000 sq km (36,679 sq miles)” of Syria, which is 50% of the country’s entire territory, the SOHR said.

The militants dominate the provinces of Deir al-Zour and Raqqa and have a strong presence in Hasakeh, Aleppo, Homs and Hama. However, correspondents say there are large areas under IS control in the east that are not very significant strategically.

IS has also been made significant gains in neighbouring Iraq, capturing the strategically-important city of Ramadi in Anbar province after weeks of fighting.