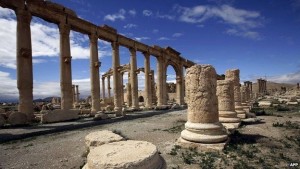 Islamic State (IS) militants in Syria have entered the Unesco World Heritage site of Palmyra after seizing the town next to the ancient ruins, reports say. Unesco says its destruction would be “an enormous loss to humanity”, but no damage has been reported there yet. BBC reports:

IS now control the nearby airport, prison and intelligence HQ, the Syrian Observatory for Human Rights says. The militants have previously demolished ancient sites in Iraq that pre-date Islam. The BBC’s Jim Muir in Beirut says acute international concern over Palmyra might actually spur the jihadists on to make destroying it a priority, since they delight in challenging and horrifying world opinion.

The ancient ruins are situated in a strategically important area on the road between the capital, Damascus, and the contested eastern city of Deir al-Zour.

Palmyra is also close to oil and gas fields which the Syrian government uses to generate electricity for areas under its control in the west of the country. Rising out of the desert, the site contains the monumental ruins of a great city, which Unesco and others consider one of the most important cultural centres of the ancient world.

Share
Facebook
Twitter
WhatsApp
Previous articleEuro Transfer Gossips: Benitez Lined Up as Ancelotti’s Successor at Real
Next articleChina To Explore ‘Dark Side’ Of The Moon
- Advertisement -Ad ==> Discover how a young Nigerian graduate now makes a consistent 40k per week doing a legitimate online business. You too can start yours now, click here!!!