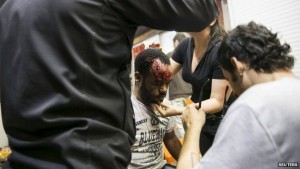 Dozens of police and protesters have been hurt after a protest by Ethiopian Israelis against alleged police brutality turned violent in Tel Aviv. BBC was there:

Thousands of Israeli Jews of Ethiopian origin had taken part in a rally before some demonstrators tried to storm the city’s municipality building. Police fired tear gas and stun grenades as protesters threw bottles and bricks.

Tensions have risen after video emerged last week showing two policemen beating an Ethiopian Israeli soldier. Two officers have been suspended and the incident is being investigated. Israeli President Reuven Rivlin blamed a “handful of violent trouble-makers” for Sunday’s violence but said Ethiopian Jews’ grievances had to be addressed.

The protests, he added, exposed “the pain of a community crying out over a sense of discrimination, racism, and of being unanswered. We must look directly at this open wound.” On Monday, Israeli Prime Minister Benjamin Netanyahu will meet the soldier who appeared in the video, as well as Ethiopian community leaders.