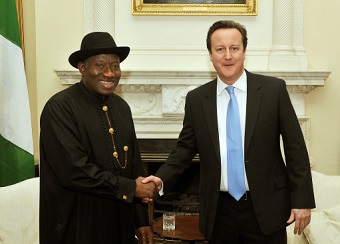 President Goodluck Jonathan on Friday conveyed his congratulations to Prime Minister David Cameron and the Conservative Party of Great Britain on their victory in the country’s general elections.

The Conservatives are expected to form a new government in Britain having secured 330 seats in parliament during Thursday’s election.

The party’s 330 seats – four more than the needed for a Commons majority – was their first since 1992.

The president’s congratulatory message, which was contained in a statement signed by his Special Adviser on Media and Publicity, Dr. Reuben Abati, assured Mr. Cameron and his party of the best wishes of the government and people of Nigeria as they prepare to form a new British Government.

The statement read in part, “The President expects that the historic relationship between Nigeria and Britain which received a significant boost during the past five years of his Presidency in Nigeria and Mr. Cameron’s first term in office, will continue to blossom in coming years for the benefit of both countries and their citizens.

“President Jonathan particularly hopes that both countries will continue to strengthen current bilateral cooperation between them in critical areas such as the fight against insurgency and terrorism, education, trade, infrastructure and the achievement of Nigeria’s development targets.

“The President wishes Prime Minister Cameron a very successful new term in office and trusts that he will continue to serve the people of Britain and the global community to the best of his immense God-given abilities”.