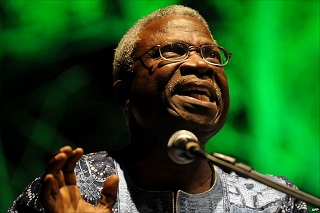 A renowned poet, Prof. Niyi Osundare, on Sunday took the President Goodluck Jonathan administration to the cleaners, saying the president gave “corruption a well-furnished chair in his dining room”.

The Professor of English spoke during the annual Distinguished Alumni Lecture of the Christ’s School, Ado-Ekiti, Alumni Association, in Lagos.

Osundare, who spoke on the topic, “No more business as usual: Nigeria’s new-found change and the lessons from the past”, described the Peoples Democratic Party-led Federal Government as a nightmare to the nation.

He said had the PDP won the March 28 presidential election, the country would have headed for “the purgatory of desolation”.

The poet lampooned the outgoing administration for promoting impunity and weakening the economy.

He said it was unfortunate that a former Minister of Aviation, Stella Oduah, who was indicted in the N255 million bulletproof cars’ scandal, could be elected as a senator.

According to the 2014 Nigerian National Merit Award recipient for academic excellence, the outgoing Jonathan administration made evil deeds attractive by not punishing government officials indicted for corruption.

He said, “We have a President who saw no difference between right or wrong. Here is a President who saw no difference between stealing and corruption. The PDP offered transformation without change, motion without movement. The President made evil deed attractive. People commit crimes and get away with it. As long as you belong to the President’s party or you know his wife, you are safe. A criminal runs to Aso Rock for being called a thief and the President shuts the gate and say, be not afraid”.

Osundare, however, urged the President-elect, Muhammadu Buhari, to deliver on his campaign promises, noting that President Barack Obama refused to visit Nigeria because the country was not leading by example.

The poet also urged Nigerians to hold the new government accountable, warning that if the All Progressives Congress failed to perform, Nigerians should vote the party out.

“Rather than be the giant of Africa, Nigeria has become a gigantic embarrassment”, he said.

Advising the Buhari government, he said, “We demand drastic reduction in the remuneration of public officials. Government should no longer be a ‘chop chop bonanza’. This outrageous expenditure of the government is destroying the economy and depleting our moral capital.

“We must break the jinx of erratic electricity. Let us try a knowledge-driven economy. The new government should surround itself with people who are not afraid to ask questions. If leaders steal less and think more, there will be change”.