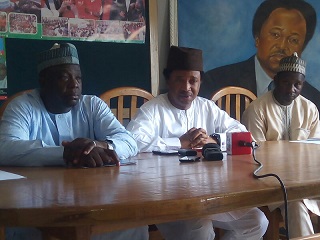 The Senator-elect for Kaduna Central, Comrade Shehu Sani, on Saturday took President Goodluck Jonathan to task on sale of the Power Holding Company of Nigeria, PHCN, and the last-minutes sale of the Nigeria Telecommunications Limited, NITEL.

The rights activist also lampooned the Coordinating Minister for the Economy and Minister of Finance, Ngozi Okonjo-Iweala, on her economic policy.

The senator-elect, who spoke when he received the Kaduna state executive of the National Union of Road Transport Workers, NURTW, in his office in Kaduna, also described the current leadership crisis in the Nigeria Labour Congress, NLC, as a disgrace to Nigerian workers.

He described the privatization exercise under President Jonathan as a monumental theft of Nigeria’s collective resources in the interest of a few.

“The sale of PHCN has not translated into consistent electric power in our homes, in our offices, in our markets and in our work place”, he said, adding that the issue of privatization has also seriously affected many workers who were employed in those institutions for decades.

Mr. Sani also stated that, “the last minute-sale of NITEL to a private firm at a time when the government is supposed to be preparing notes for handover is also suspicious or irrelevant at this time”.

The Director, Civil Rights Congress, also accused the finance minister of damaging Nigeria’s economy by policies he said failed to impact positively on the lives of majority of Nigerians.

“They claim progressive economic statistics on paper while our people continue to suffer in abject poverty, want and penury.

“All the economic indicators that have been churned out by the Jonathan administration is in direct conflict with the reality of the situation on ground as far as Nigeria is concerned.

“Most of our industries have closed down, the value of our naira has crashed and many people are out of job and the claim of thousands of jobs created by the government is suspect and simply on paper. This is also an issue we have to look at in the incoming administration”, he added.

He described the government of President Jonathan as “literally a political restaurant whereby people are invited to come and feed. That is why President Jonathan is saying that those who decamped from PDP to APC will come back with empty stomach.

“The idea of governance under Jonathan is about people using the opportunity of being in office to service themselves and their immediate families.

“The bickering in the PDP after the failed elections are simply nothing but pant of death of a party that has inflicted serious hardship on Nigerians in the last 16 years”.

On the impasse currently rocking the NLC, Mr Sani said the development is a disgrace to workers, to Nigerian people and to the country at large.

He said it is unfortunate that after decades of viable labour movement in Nigeria, the country now has a labour that is divided against itself.

“NLC as it exists at this time cannot fight the interest of Nigerian workers as long as it remains divided”, Mr. Sani said.

He, therefore, called on the incoming government of Muhammadu Buhari to reconcile the factions within the NLC for the collective interest of Nigeria and the Nigerian workers because according to him, “a house divided against itself cannot stand”.

He also told his visitors that as a very important sector of the economy, they have a role to play in mobilizing and sensitizing people for the success of the incoming administration.

The senator-elect also advocated a bill to protect the local automobile industry so that Nigerians would better patronize made-in-Nigeria cars, saying that would provide jobs and boost Nigeria’s economy.

Speaking earlier, the state chairman of NURTW, Alhassan Haruna, appealed to government to come to the aid of his Union’s over 60,000 members by assisting them to improve on their transport business.