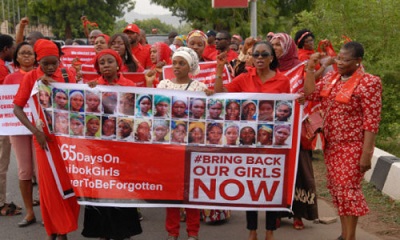 Members of the #BringBackOurGirls advocacy group have demanded that President Goodluck Jonathan offer an unreserved apology to the group and Nigerians for denying the abduction of the Chibok girls and unleashing attack dogs on the group.

They said the group and Nigerians will never forgive him if he does not apologise for the part he played in ensuring the girls remained in captivity for over a year.

A member of the group Mr. Chude Jideonwo, stated this on Thursday in Abuja‎ during the group’s symposium marking, one year of advocating for the abducted Chibok girls’ freedom.

He said, “We demand an apology from President Jonathan for not only denying the disappearance of these girls but for attacking innocent citizens who stood up to demand that he must do his job.

“He owes every single citizen of this country an apology or we will never forgive him”.

Another member of the group, Dr. Allen Mannanseh, said the Chibok community and parents of the girls are demanding for full disclosure on the rescue mission of their daughters.

Manasseh, who is Director of Publicity of Kibaku Area Development Association (KADA), an organization representing the Chibok people in Abuja, said the family and friends of the girls want disclosure – they want to know what happened to the girls or where they are so that they can stop mourning and that the community demands for the prosecution of everyone involved in deceiving Nigerians on the ceasefire deal.

His words, “We want a full disclosure from the present government‎ on what it has done to rescue our girls, we want complete accountability of reports on the rescue operation from the government. They told us that the 200 girls recently rescued are not our girls and that they have been combing villages around Sambisa and asking the villagers if they saw our girls.

“All we want from them is disclosure and not how many villages they have combed. I spoke to the escapee girls today and they told me that they are tired of mourning for their friends for over a year, they said that they want disclosure, they want to know if the girls are still alive and will return or not‎ so that they can move on with their life.

“We are also demanding that‎ all those people involved in deceiving us and Nigerians on the alleged ceasefire deal be prosecuted to the full extent of the law”.