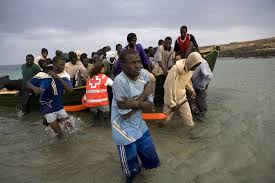 President Goodluck Jonathan has called on the ECOWAS Authority of Heads of State and Government to take measures to stem migration of youths in the sub-region through the Sahara Desert and the Mediterranean Sea to Europe, which has led to thousands of deaths of sub-Saharan Africans.

According to the International Organisation for Migration (IOM), more than 1,750 migrants perished in the Mediterranean since the start of the year, several of them Africans.

In his valedictory speech at the 47th ordinary session of ECOWAS in Accra, Ghana, President Jonathan urged African leaders to discuss the matter at the African Union Summit that will hold from 7th to 15th June 2015. At the time, Jonathan would have left office as Nigeria’s president. The president-elect Muhammadu Buhari will be sworn in on May 29.

President Jonathan, in his speech, noted that though Africa had attained some modest achievements in recent time. He stated that the issue of traffickers which had led to the death of many innocent persons represent a dent on the continent.

“While we are making real progress in many core areas, there are issues that require our attention.

“In the past few years, we have witnessed a growing wave of young men and women from our sub-region undertaking very perilous journeys across the Sahara desert and the Mediterranean Sea to Europe,” Jonathan said.