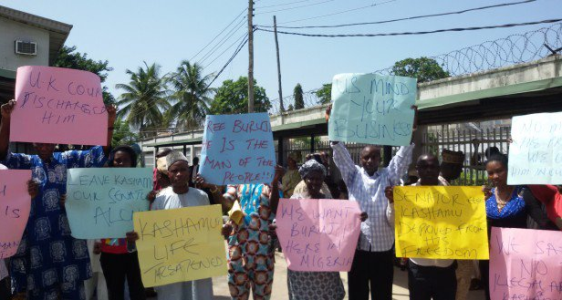 The embattled Senator-elect for Ogun East District, Buruji Kashamu, is yet to appear in court for his extradition proceedings scheduled for Monday (today) at the Federal High Court, Lagos.

It was learnt that neither Mr. Kashamu nor any of his aides as at 2.PM today had left his Lekki Phase 1 residence in Lagos, where he had barricaded himself against forceful arrest by operatives of the National Drug Law Enforcement Agency.

“Senator-elect, Buruji Kashamu has failed to appear in court from his house where he is being closely monitored by operatives of the National Drug Law Enforcement Agency”, the NDLEA said in a statement issued Monday afternoon.

“The Agency is working hard to ensure that he submits himself to the due process of the law”, the NDLEA spokesperson, Mitchell Ofoyeju, said.

“His house remained cordoned by anti-narcotic officers pending his appearance in court”.

Meanwhile, in anticipation of his appearance in court on Monday morning, supporters of the multi-millionaire hotelier had thronged the court’s premises to protest his planned arrest and possible extradition to the U.S. where has been declared a fugitive from the law.

Mr. Kashamu, according to a statement issued by the NDLEA on Saturday, “has been a target of both the U.S. Drug Enforcement Administration (DEA) and Immigration and Customs Enforcement (ICE) of the Department of Homeland Security (DHS) for over 20 years and was indicted in the Northern District of Illinois, United States, on charges brought against him by ICE”.‎

But the supporters, mostly elderly women and a few youth, who purportedly arrived from Ijebu Igbo in Ogun State bearing placards, demanded the senator-elect’s release.

Some of the placards protesters displayed read ‘Free Buruji, He’s the man of the people’, ‘Leave Kashamu our Senator alone’, ‘UK Court discharged him’, ‘Kashamu is Innocent’, ‘We need him in Nigeria not U.S’, ‘We say no to illegal house arrest of Kashamu’.

‎Speaking to journalists on behalf of the supporters, Yemi Akinwomi, a former Ogun State Secretary of the Peoples Democratic Party, said Mr. Kashamu rekindled the PDP’s relevance in the state, adding that his house arrest is an abuse of power.

“These people forgot that the world is watching us. Where is it done all over the world that you are going to arrest a man, a highly placed person, a senator-elect without a warrant of arrest and you force yourself into his house, into his private life and you have held him captive for the past 75 hours without any paper from the court?”