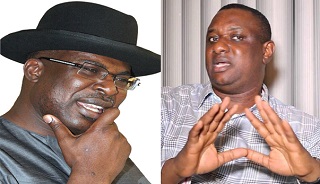 Radical lawyer, Festus Keyamo, has withdrawn as prosecuting counsel in a case of corruption proffered against former Governor of Bayelsa State and All Progressives Congress (APC) chieftain, Chief Timipre Sylva by the Economic and Financial Crimes Commission, EFCC.

It would be recalled that the former governor was docked alongside his co-accused in July 2014 for allegedly using three companies to siphon funds from Bayelsa State treasury between 2009 and 2012.
‎
The companies are Marlin Maritime Limited, Eat Catering Services Limited, and Haloween-Blue Construction and Logistics Limited.

Mr. Keyamo, who is lead prosecutor for the EFCC in the case, said he was stepping down due to recent developments which could hinder him from prosecuting the case effectively and vigorous.

He, however, failed to give further details of the said ‘developments’.
‎
“Kindly recall that sometime in 2012, the Commission briefed my Chambers to prosecute Charge No. FHC/ABJ/CR/23/2012; Between: The Federal Republic Of Nigeria V. Timipre Sylva, he wrote in a letter to the EFCC.

“Since then, we have diligently prosecuted the Charge and successfully opposed the bid of the accused person to quash the Charge in limine. The court ruled in our favour for the trial to commence and the Court of Appeal also refused to stay proceedings in the trial.

“However, certain recent developments (in respect of which I would prefer not to elaborate) have necessitated my decision to withdraw from further prosecution of the said Charge. This is because these recent developments may hamper my effective, efficient and vigorous prosecution of the Charge, duties that are expected of every prosecutor”, Keyamo said.

The trial of the case had been fixed for Monday, May 25.