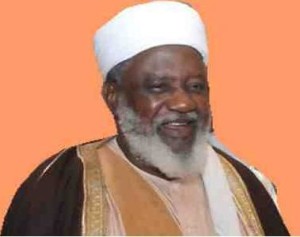 President Goodluck Jonathan has commiserated with Muslims nationwide on the death of the Chief Imam of Abuja National Mosque, Ustaz Musa Muhammed.

Muhammed, 68, died at the National Hospital, Abuja on Saturday following a brief illness.

He was buried in Abuja on Sunday in line with Islamic rites.

In a statement issued on Sunday by his Special Adviser on Media and Publicity, Dr. Reuben Abati, the president noted that the deceased in his lifetime inspired his followers with his exemplary lifestyle, moral conduct and teachings.

He added that the late Islamic cleric stood out as a passionate and diligent promoter of inter-religious understanding and co-operation.

“President Jonathan also commiserates with members of the family of the late cleric who greatly inspired his followers with his exemplary lifestyle, moral conduct and teachings.

“President Jonathan believes that Ustaz Muhammed, who stood out as a passionate and diligent promoter of inter-religious understanding and co-operation, will always be remembered as a bridge-builder and a gentleman in every circumstance.

“The President prays that Allah in his mercy will grant him peaceful rest in Al-Jannah Firdaus”.

Muhammed was among residents of the Federal Capital Territory, who were led by Vice President Namadi Sambo to pay President Jonathan Easter homage at the Presidential Villa, Abuja on April 5.