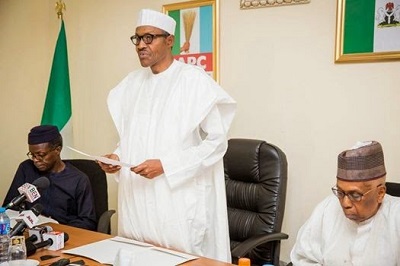 The Conference of Nigerian Political Parties, CNPP, has faulted the visits of those it termed ‘corrupt Nigerians’ to the president-elect, Muhammadu Buhari, saying the trend could scuttle the war on corruption by the incoming administration.

The group also asked Mr. Buhari to work fast with the National Assembly to not only enact a law to protect whistle blowers, but also to work expeditiously on the imperative to cut the cost of governance across the board.

In a statement by its spokesperson, Osita Okechukwu, on Sunday, the CNPP said the alleged corrupt Nigerians should be barred from further visiting the president-elect because they were the same people that allegedly misled the outgoing president, Goodluck Jonathan.

“We are re-stating our position, because we have noticed some looters of our commonwealth milling around the Defence House, the temporary office of president-elect”, it said.

“To compound matters, pundits are pushing the narrative that GMB should let bye-gone be bye-gone and move on, accommodate all in his cabinet, hence a unity government. The unity government if necessary should be devoid of corrupt men.

“Whereas, courtesy demands that the good, bad and ugly will pay courtesy call on the president-elect; however it is our considered view that some of these looters should be kept at bay.

“These are the same ignoble men who wittingly misled President Goodluck Jonathan, who grow mega-rich, widen the inequality in the land and pushed the greatest number to abject poverty”.

Stating that the extermination of corruption and security form the broad social contract the president-elect made with Nigerians, the group said it takes “solace on the truism that GMB cannot risk dashing the hopes of Nigerians”.

It said that, “history posits that the past must be probed in order to not only to recover huge billions stolen from our commonwealth; but to also act as deterrent to others, who are lurking in the wings to continue the pervasive corruption in the land”.

While throwing its weight behind the plan by Mr. Buhari to inaugurate a National Council on Procurement, the CNPP proposed that the headship and membership of the Council be amended before composition.

It said recent experience showed that the absolute powers wielded by the out-going Minister of Finance, Ngozi Okonjo-Iweala “allegedly corrupted her absolutely and made a mess of the two regimes she served in the last decade”.

It stated, “The National Council on Procurement should be headed by those whom the president-elect has implicit confidence on, manning no ministry, department or agency, except the Council. There should no distraction”.

The CNPP also said it was in support of Mr. Buhari’s decision not to endorse any of those aspiring to leadership positions of the National Assembly.

“We acclaim his stand-point that he is not endorsing anybody for the principal offices of the National Assembly – viz Senate President, Speaker et al. Endorsement is antithetical to the growth of democracy and distorted our parliamentary democratic practice since our return to civil rule”.