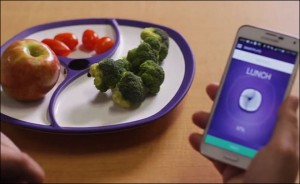 A Pennsylvania inventor is seeking funding for his weight loss tool: A “smart plate” that knows what you’re eating and when you’ve had too much. UPI has more:

Anthony Ortiz said his SmartPlate, which he is attempting to fund with a Kickstarter campaign, uses built-in cameras and weight sensors to identify the food being eaten and uses wifi and Bluetooth to pair with an app and keep track of the user’s diet.

“I didn’t create this product to shame people or anything like that,” Ortiz told KATU-TV. “We’re not the food police.”He said the SmartPlate can do more than track overeating — it can also keep track of under eating. “Let’s say you’re a bodybuilder. You want to consume 30 grams of protein at every sitting,” Ortiz said. “If you don’t meet that, you’ll get a warning that says, ‘You did not hit 30 grams of protein.'”

Ortiz said the plate, which he hopes to ship in 2016 if his Kickstarter campaign is successful, can also track carbohydrates for diabetic users. “The app will work with you to help you meet your dietary objectives,” Ortiz said. “It’s whatever you want to use the info for. The plate’s not there to hit you over the head.”

The inventor said he was inspired by his own father’s trouble with heart disease and the difficulty some people have keeping track of their own food intake. Ortiz admitted the plate has one major limitation — it is not microwavable.”However we do have a portable microwaveable lid that will be utilized to heat up the food,” he told  CNBC.