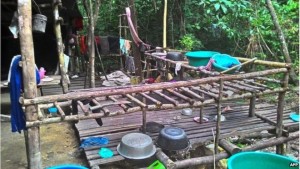 Malaysia has begun exhuming bodies suspected to be migrants buried in mass grave sites found by the Thai border. Authorities believe migrants were held for ransom in jungle camps, and those who died were buried in 139 graves. BBC was there:

Thousands of migrants have left Myanmar and Bangladesh in recent weeks on boats and overland through Thailand and Malaysia. Some have ended up in the hands of human traffickers. Thailand has meanwhile offered a “floating naval base” to help migrants.

Officials believe the camps were only abandoned recently, following a crackdown by Thailand on human traffickers after similar mass graves were found in its southern Songkhla province. Some migrants were apparently held at the camps in “human cages” made of wood and barbed wire.

Malaysia’s national police chief Khalid Abu Bakar said there were signs that torture had been used, but he did not elaborate. “We were shocked by the cruelty,” said Mr Khalid. Referring to the “cages”, he told reporters: “We think the migrants were imprisoned in these wooden pens…They were not allowed to move freely and traffickers kept watch at sentry posts.”