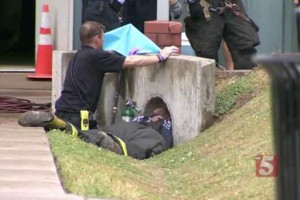 Firefighters in Nashville broke through a cement pipe to free a man who spent four days trapped in a storm drain. Brian Williams said he was with his family Sunday at the Centennial Sportsplex when they heard a voice calling for help from a storm drain about 12:30 p.m. UPI has more:

“We used our flashlights from our cellphones and we could see him, but he was back in the pipeline a good ways, probably about 10 feet,” Williams told WKRN-TV. Firefighters dug into the ground and broke through a concrete pipe to free the man in a rescue operating lasting nearly an hour.

“He said, ‘Praise God. Thank you. I have been down here forever.’ And he was just very happy at that point,” Williams said. Nashville Fire Department officials said the man spent about four days trapped in the storm drain near the Sportsplex’s tennis courts. They said he apparently climbed into the drain on a nearby street Thursday for unknown reasons and became trapped due to a bend in the narrow drain pipe.

Firefighters said the man suffered cuts to his body and was dehydrated. He was taken to TriStar Centennial Medical Center for evaluation and treatment. “If we had some rain, you know obviously he was in a storm drain, so it could have ended very badly for him. I think he had a guardian angel overlooking him and he was able to get out of there alive,” Williams said.