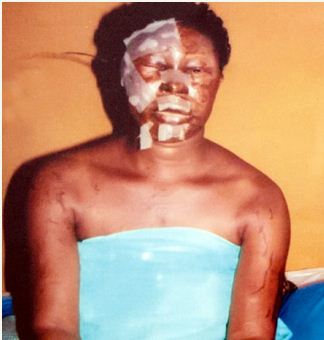 One Ajayi Olatunbosun has been arrested by the police for allegedly hiring thugs to pour acid on his ex-wife, Bamidele Otakiti, in her shop on Adejobi Street in the Ajasa Command area of Lagos.

PUNCH Metro gathered that all had been well between the couple since they moved to Lagos in 2005 until a few months ago when a disagreement soured their relationship.

The quarrel was said to have led to their separation in February, 2015.

It was learnt that the suspect, prior to the divorce, had on several occasions accused Otakiti of adultery.

Our correspondent gathered that despite his discontent with the alleged act, the 47-year-old commercial motorcycle rider (okada rider) had pleaded with the woman not to divorce him.

It was learnt that Otakiti bore three children for Olatunbosun.

PUNCH Metro gathered that the two-man assailant team had come to Otakiti’s shop on April 21 at about 7.30pm, with a substance which later tested positive for acid. She was reportedly trying to give them change for some items they had bought when they poured the substance on her.

The attackers allegedly told the woman that they were sent by her ex-husband before they fled the area.

She was said to have been rushed to a nearby hospital, from where she was referred to the General Hospital, Ile Epo, for intensive care.

Olatunbosun, who lives on Adetoun Street, Abule-Egba, was apprehended after his alleged involvement in the incident, which was reported at the Meiran Police Station.

A police source told our correspondent that the Ifewara, Osun State, indigene initially denied the allegation, but later owned up after being thoroughly quizzed.

The source said, “He initially denied hiring the thugs. But after a comprehensive interrogation, he confessed, saying the woman had been flaunting her beauty and committing adultery. He is giving us useful information to track the fleeing suspects.”

Olatunbosun was brought before an Ojokoro Magistrate’s Court on two counts of assault preferred against him by a police prosecutor, Inspector Benson Emuerhi.

The charges read, “That you, Ajayi Olatunbosun, 42, and two others now at large, on April 21, 2015, at about 7.30pm on Adejobi Street, Ajasa Command, Lagos, in the Ikeja Magisterial District, did conspire to commit felony to wit: grievous harm and thereby committed an offence contrary to and punishable under Section 409 of the Criminal Law of Lagos State of Nigeria, 2011.

“That you, and two others now at large, on the same date, time and place, in the aforementioned magisterial district, did grievously harm one Bamidele Otakiti by pouring liquid acid on her and thereby committed an offence contrary to and punishable under Section 243 of the Criminal Law of Lagos State, Nigeria, 2011.”

Mrs. O.A. Olayinka, a senior magistrate, admitted him to bail in the sum of N500,000 with two sureties in like sum.

“The sureties must show evidence of means of livelihood to the court for verification,” Olayinka added.