Home National News Odd News Man Shoots Himself In The Foot To Experience The Feeling Of Being...
Facebook
Twitter
WhatsApp 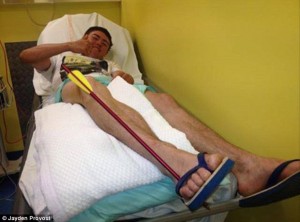 A man was rushed to a hospital with a gunshot wound after shooting himself in the foot, police in Spain said. Police said that the 35-year-old unidentified man was admitted to the hospital last weekend in Elda. Odd News Blog has more:

Police have not yet found the gun that the man used to shoot himself in the foot. Investigators believe that he threw it out of the car window on the way to the hospital.

Officers who arrived at the scene, found Wiliker laying on the porch of the tavern, where the man told officers he had accidentally shot himself. He was treated by the Fire Department and then transported to Mercy Hospital for further treatment. According to the police investigation, Wiliker had been playing video poker and had the gun in his pants.

When he stood up, the gun moved and when he grabbed it, it discharged. He was hit in the private parts and the right leg, but his injuries were not considered life threatening. Wiliker was charged with illegal possession of a firearm.