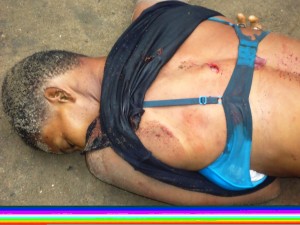 Last Friday in Calabar, Cross River state, a young man, now on the run, stabbed a girl in her early twenties simply identified as Queen to death over a mobile phone at Nelson Mandela street by Target road, Calabar South LGA. CrossRiverWatch reports:

CrossRiverWatch heard that while the phone retrieval process was in motion, an argument and fight ensued, with the assailant employing his masculine strength and overpowering both his girl friend and the late Queen, stabbing both ladies unconsciousness while he fled.

Our informant says as the death of the late Queen got to the family, they swiftly moved and picked the corpse, dumping it at the residence of the suspected murderer now at large, and that the alleged murderer is said to be living somewhere on Forsbery street, Calabar.