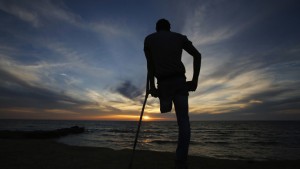 A south Florida man is suing a hospital for emotional distress, saying his leg was amputated and thrown in the garbage with his name tag still on it. John Timiriasieff, 56, had his right leg amputated below the knee in October at Doctors Hospital in Coral Gables. Yahoo News has more:

“Rather than properly disposing of the plaintiff’s limb as expected and as required by Florida law, Doctors Hospital threw the Plaintiff’s amputated limb into the garbage, with tags indicating it belonged to the Plaintiff,” according to the lawsuit filed on Wednesday in Miami-Dade County Circuit Court.

A month later, Timiriasieff said his family was contacted by homicide detectives investigating if he had been the victim of foul play. When the family went back to the hospital to find out what happened, they were told it would “provide no explanation for what had occurred,” the lawsuit said.

Doctors Hospital Inc, part of the Baptist Health South Florida Inc, said it could not discuss the incident in detail because of patient privacy considerations. “However, we can say when Doctors Hospital was notified of this situation, hospital leaders took immediate and appropriate measures to address it,” it added in an emailed statement. “Proper procedures have been reinforced at the hospital to prevent similar situations from happening in the future.”