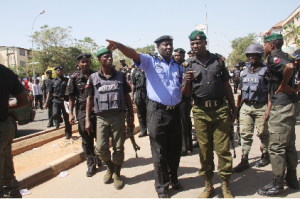 The police in Ogun State are on the trail of a man alleged to have murdered his friend, Idris Alaba, and abandoned his mutilated corpse at an uncompleted building in the Makun, Sagamu area of the state. It was learnt that the fleeing suspect was a member of a vigilance group in Ibafo, Owode Local Government Area, which the deceased, aged 47, headed until his death. PUNCH Metro reports:

John and Alaba had reportedly left for Makun on May 3, 2015 to guard a facility, but the former did not return to his house on Ajumobi Street, creating anxiety in his family. It was gathered that the father of four was reported missing at the Ibafo Police Station. A resident of Ajumobi, Boye Ajayi, told our correspondent that John’s children gave them a clue that led to the recovery of Alaba’s corpse. He added that his eyes had been gouged.

He said, “Everybody became worried when it was 10pm and Baba Ruka (Alaba) had not come back home that Sunday. None of his family members were around when he and John left. But we knew he and John were close friends. The following day, when we went to John’s house, his two sons had packed their luggage. They told us they heard their father saying he was going to Makun with Baba Ruka.

“Other members of the vigilance group confirmed that there was a facility that the duo guard in Makun. We took the children to the police station and headed for the place. We found his corpse there with his two eyes removed.” A police source told PUNCH Metro that the suspect’s children said their father, while going to Makun, had told them to sort themselves out in case he did not come back.

“We interrogated the children and they told us that their father had warned that he might never come back home again. “His children were packing from the area when they were brought to the station. We are keeping them in the station because they may be attacked by the family members of the deceased,” he said.