Home Entertainment Manny Pacquaio Made It Possible For Thousands Of Filipinos To Watch The...
Facebook
Twitter
WhatsApp 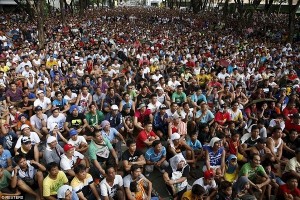 The world witnessed the biggest boxing match of the century just a day ago, it was between Mayweather and Manny Pacquiao.

Mayweather from America was up against the Filipino, Manny Pacquiao.

The Filipinos were all gathered in one place to watch the bout on a big screen in Manila.

Unfortunately, their man, was defeated by Mayweather