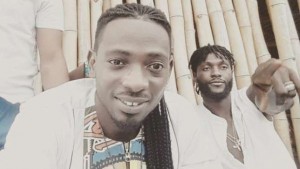 Nigerian dancer and pop singer, May D who made the news last week because of his new relationship with a Swedish woman, has been seen hanging out with troubled Tottenham striker Emmanuel Adebayor.

May D who is now rocking braids took a selfie with Emmanuel Adebayor who has been sent on a compassionate leave by Tottenham.

The Togolese striker has gone through a rough month after exposing the dirty secrets of his family.

In the picture Adebayor looks at ease despite his recent troubles.

May D also shared an Instagram video of Adebayor driving him in his car.