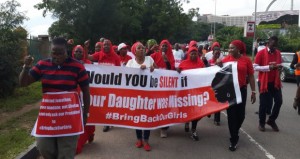 The Nigerian military has cautioned the #BringBackOurGirls(BBOG) group and other advocacy groups against hate campaigns as they do not help in the ongoing Counter-Terrorism and Counter Insurgency (CT COIN) operations in the North-East.

In a letter addressed to the leadership of BBOG on Sunday, Director of Defence Information (DDI), Maj-Gen. Chris Olukolade, advised them to be wary of charlatans looking for a platform to denigrate the military for selfish and ulterior motives.

“I feel constrained to call your attention to the existence and activities of charlatans in your midst who have never had the privilege of responsible service in public sector but are now keen to see everyone in position brought down to entertain their fancy and envy,” he said.

Olukolade noted that the detractors have sought to equate the military’s efforts to give accounts of activities on Nigeria’s war on terror as propaganda or cover-up. But they should, however, note that the battle situation could be very fluid and susceptible to rapid changes.

“The situations around the battle could also change accordingly in an inexplicable manner. This trend is also compounded by various perspectives that have been employed to seriously polarise the understanding of the situation along the line of all kinds of sentiments and biases prevailing in the environment.

“We cannot engage in a shouting match with those who have other motives. We can only try to explain the situation to the best of our understanding and available information,” he said.