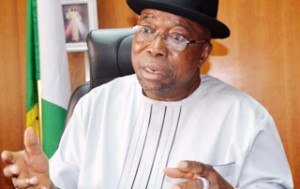 The Minister of Niger Delta Affairs, Dr Stephen Oru, on Monday dismissed speculations that he donated N2 billion to the presidential campaign of President Goodluck Jonathan.

Oru, in a live radio programme monitored in Abuja by the News Agency of Nigeria (NAN), said those making the allegation were mischievous as they were determined to tarnish his image and that of the President.

NAN reports that a group of Niger Delta youths who were sponsored to Israel for training in agriculture, had accused the ministry of not redeeming all the promises made to them.

They beneficiaries also accused the minister of dismissing their appeals by saying that he had no money as he used N2 billion to fund the president’s campaign.

However, the minister said the Niger Delta Ministry, which was allocated N51.6 billion in the 2014 appropriation, was yet to receive its third and fourth allocation from the Federal Ministry of Finance.

He explained that it was therefore not possible for the ministry to dole out a non-existent N2 billion to the PDP presidential campaign.

The minister, who assumed duty in July 2014, described the financial situation in the ministry as precarious, citing huge debts and unpaid salaries.

According to him, since he assumed duty in July 2014 as minister, he has received only three months salary.

The minister appealed to Niger Delta youths who participated in the federal government sponsored training programme in Israel on agriculture to exercise patience on the disbursement of their take-off grant.

According to him, under the terms of the training programme, government is supposed to provide seed money to the recipients to establish agriculture related business.

He said the ministry was discussing with the Bank of Agriculture (BOA) on how to secure soft loans for the youths, who completed the one month training programme in Israel.

The minister assured the prospective entrepreneurs that the incoming government would not terminate the training programme as it was a laudable initiative domiciled in the ministry. (NAN)