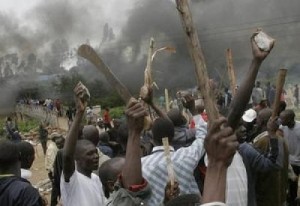 The United Nations Children’s Fund (UNICEF) says over 743,000 under-18 children have fled their homes to escape violence perpetrated by Boko Haram in the North-East.

This was made known by the Chief Child Protection UNICEF Nigeria, Rachel Harvey, who spoke in Abuja during an occasion to commemorate this year’s Children’s Day celebrations.

She lamented that many Nigerian children were still living under the shadow of one form of violence or the other. “Most alarming is the level of violence in the North-East, of which children are bearing the brunt. Over 743,000 under-18s have fled their homes to escape the violence.”

“Many children in Nigeria live under the shadow of violence not just in their communities, but also in their homes and in their schools, places that should provide safety from harm.

“Children have lost their lives, witnessed horrific acts of violence, been forcibly recruited to fight and been subjected to sexual violence,” she said.

This year’s Children’s day focuses on an important theme for Nigeria: Violence Against Children: Addressing the Challenges. The immediate past Minster of Women Affairs and Social Development, Hajia Zainab Maina said the choice of the theme was informed by the Nigerian environment characterised by insecurity as well as violence against women and children.

Maina said it was a calculated attempt by the Ministry to create more awareness, sensitize stakeholders on the ills of violence, sexual abuse and exploitation of children.