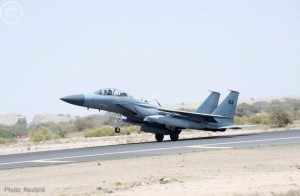 A Moroccan F-16 warplane has gone missing while on a mission with Saudi-led forces in Yemen, Morocco’s military said on Monday, and Yemen’s dominant Houthi militia said regional tribesmen shot down the aircraft. Reuters report:

The disappearance of the Moroccan jet and intensifying duels of heavy-weapons fire across the border between the Iran-allied Houthis and Saudi forces could endanger a five-day humanitarian truce due to start in Yemen on Tuesday morning. Saudi-led air strikes hit military bases and weapons stores in the Houthi-controlled capital Sanaa on Monday evening, setting off huge blasts that residents said launched rockets into the air which then crashed back down.

“The violent explosions can be heard from anywhere in the city and we feel they could land on our heads. We’re living a life of terror,” Sanaa resident Ahmed Fawaz said. Backed by Washington, the Saudi-led coalition has been bombing Houthi rebels and army units loyal to ex-president Ali Abdullah Saleh since March 26 with the aim of restoring exiled President Abd-Rabbu Mansour Hadi to power.

The Houthis’ ties to regional rival Iran have rattled the Gulf Arab states and the rebels remain the strongest force in Yemen’s civil war. Saudi Arabia, the world’s top oil exporter, regards the Houthis’ rise as a grave threat. Morocco is one of eight Arab states to have joined Saudi Arabia in the military intervention against Houthi advances.