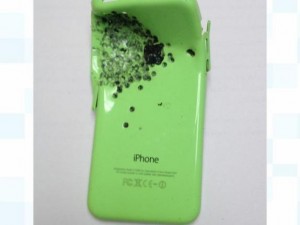 A British man was convicted of attempted murder in the shooting of a man police say survived when his iPhone absorbed most of the shotgun blast. UPI reports:

Ryan Duggan, 19, was convicted this week in Chester Crown Court of attempted murder and possession of a firearm with intent to endanger life stemming from the October 2014 attack on a 25-year-old man.

Police said the victim approached a group of teenagers who had shut off the water supply to his apartment block and one of the teens, identified as Duggan, fired a sawed-off shotgun at the man. The man’s life was saved when his iPhone absorbed the brunt of the blast, police said.

“Fortunately, the victim’s mobile phone took the brunt of the shot and, as a result of this, he survived. This is remarkable — had that phone not been in his pocket at that time he would undoubtedly have died,” Cheshire Police Detective Inspector Gary McIntyre said after the trial.

McIntyre said the victim is still being treated for his injuries and will likely require further operations and rehabilitation. Duggan, whose gun was found covered in plastic wrap inside a bush, is scheduled for sentencing July 10.