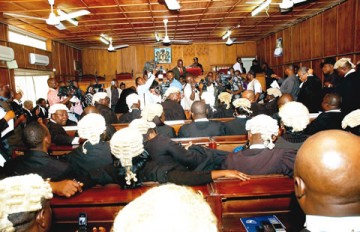 The National and State Assemblies Election Petition Tribunal sitting in Owerri on Monday commenced proceedings by handling five motions filed before it.

Out of the five motions, the tribunal ruled on two ex parte motions, while the three other motions were adjourned till May 13, for hearing.

The two ex parte motions entertained were a motion filed by Accord Party versus four others and another motion filed by Donatus Ozoemena of the All Progressives Congress against Goodluck Opia and six others.

The Chairman of the tribunal, Judge A.Y. Sanya, after listening to the argument by the counsel to Mr. Ozoemena, granted three of the reliefs sought by the petitioner and struck out two others.

Mr. Ozoemena, had through his counsel, urged the tribunal to allow him withdraw the fourth and fifth reliefs which seek to direct INEC to issue him with the certified true copies of the documents in her custody.

The other relief was for the tribunal to deem the processes filed as being properly filed.

The reliefs allowed by the tribunal were the ones sought by the petitioner to call additional witnesses, to amend his petition and to file additional documents.

The second motion filed by the Accord Party seeking relief for the tribunal to allow a pre-trial date and to serve notices to the Independent National Electoral Commission, and Athan Achonu of the Peoples Democratic Party was granted.

Earlier in his introductory remarks, Mr. Sanya appealed to parties before the tribunal to co-operate with members of the panel by respecting all the ground rules.

He also warned the public against any unruly conduct, adding that anybody identified for contempt would be punished.

The Secretary of the tribunal, Adamu Mohammed, said it has a so far received a total of 37 petitions.

Mr. Mohammed said that eight came from those challenging the outcome of the March 28 Senatorial election, 18 for the House of Representatives, while 11 were for the state assembly poll held on April 11.